Education can expand understanding of the world as it is today, and help creative minds design a better mousetrap and propose changes to make today's world better. Virginia's colonial goveror, William Berkeley, saw general public education as a threat to the existing power structure, and commented in 1671:1

I thank God, there are no free schools nor printing, and I hope we shall not have these hundred years; for learning has brought disobedience, and heresy, and sects into the world, and printing has divulged them, and libels against the best government. God keep us from both! - William Berkeley

the 1909 Bennett School (built on land donated by Dr. Maitland Bennet, the father-in-law of George C. Round) was intended to be an agricultural high school, but was initially used as an elementary schoolIn contrast, Thomas Jefferson argued that public education was essential for creating voters who would be capable of protecting their liberties in the new American democracy. The Virginia General Assembly did not approve Jefferson's "Bill for the More General Diffusion of Knowledge" in 1779, but the state did create a Literary Fund in 1810 to support education of the children of indigent parents. No taxes were imposed to finance education; money deposited in the original Literary Fund came from fines and property escheated to the state when someone died with no will and no heirs. (Today a variety of taxes - and profits from the Virginia Lottery - are deposited in the Literary Fund, which finances construction of new schools.)

Orphans, bastards, and other children without parental support were indentured ("bound out") by local officials to someone willing to provide food, clothing, and shelter in exchange for the child's labor. For white boys, and often white girls, the contract required providing some education as well. In Dettingen Parish, the records of the Overseers of the Poor include many items such as the following:2

Moses Gregg, a bastard child, bound to age 21 to William Carter of Stafford County to be taught the art, mystery, and trade of house carpenter and joiner, and to write and cipher (March 24, 1760)

Benjamin Thomas, orphan of William Thomas deceased, age 11, bound until age 21 to Benjamin Rush to be taught the art, mystery, and occupation of a cooper, and to read and write (May 25, 1761)

Robert Stanhope, an orphan, 9 years of age next September, bound until age 21 to William Martin (Martain) to be taught the business of a shoemaker, and given 1 year of schooling (February 19, 1767)

Most children got whatever education parents could provide. In many areas, parents organized private schools, agreeing among themselves to pay for the salary of a teacher. "Old field" schools were one-room frame cabins, located on worn-out agricultural fields within walking distance of the families who funded the arrangement.

In some cases, wealthy benefactors donated funding to supplement such schools. In Prince William County, Samuel Jones directed in his will that 600 pounds from his estate should go to educate children in the local Anglican parish, and John Pope bequeathed 5 pounds 12 shillings in 1796 "which sum he wishes may be appl'd to the education of poor children in the same manner as Jones's Donation." Jones died in 1775, but those funds were tied up through legal disputes and poor management for a century. They were finally tapped in 1873, and lasted long enough to support public schools within the old boundaries of Dettingen Parish until 1925.3

Virginia did not offer free public education for all children until a new state constitution was adopted in 1869. Free public education was implemented as part of the state's effort to to re-enter the Union, and end its status as Military District #1 under Reconstruction. After voters approved the Underwood Constitution, the General Assembly created a system of free public schools at the elementary level.

Prince William County, led by George C. Round in Manassas, started its first free public school in 1869, a year before the state required it. Local families, plus a contribution from the Peabody Fund started by a Massachusetts philantropist. The first school met at Asbury Methodist Church on West Street. The "Manassas Village White School" moved to a new building in 1872, and was renamed Ruffner School #1 then to honor Virginia's State Superintendent of Schools, William Ruffner.4

A public school for black children started in 1870 on Liberty Street in Manassas. The "Manassas Village Colored School" was renamed the "Brown School" in 1872, to honor a Quaker woman (Mary D. Brown) who was part of the religious group in Philadelphia that provided financial support.5 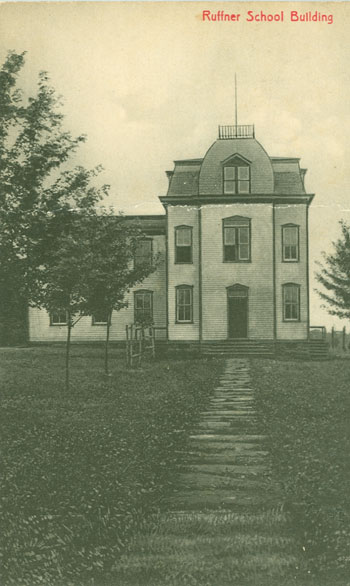 Ruffner School was constructed in 1872
Source: Prince William Library - RELIC Room, Postcard CollectionPublic schools were formally segregated in Prince William from 1869-1961. The first high school for blacks was Manassas Industrial School. It was a private school created by Jennie Dean. She got Frederick Douglass to speak at the opening ceremonies, and got private donations from two women in New York (Miss Emily Howland and C.B. Hackley), Andrew Carnegie, and others to finance operations. In 1937, the Manassas Industrial School finally became a public school, serving as the regional high school for black students in Fairfax, Fauquier, and Prince William. The first black children attended previously all-white Gar-Field High School and Occoquan Elementary School in 1961, and the last all-black schools in Prince William County were finally degregated in 1966.6

The Manassas Campus of Northern Virginia Community College opened in 1972, and the Woodbridge campus three years later. George Mason University proposed locating a new campus in Prince William County in the 1980's, started offering classes in rented space in 1991, and opened its first buildings at the current site in 1997.

Tidbits about Prince William County schools from Yesterday's Schools, by Lucy Phinney:
- Peabody Street in Manassas in names for George Peabody, who donated funds for opening the first free public school in 1869
- after passage of the Underwood Constitution, Virginia counties were divided into magisterial districts (Prince William created six - Brentsville, Coles, Dumfries, Gainesville, Manassas, and Occoquan) and each district had its own school board, which had more authority over the schools than the County School Board
- the County School Board imposed an aditional property tax to generate funds for schools, and certified that teachers hired by the districts were qualified
- the six District Boards in Prince William acquired buildings and hired teachers/principals, closed schools when attendance dropped, and established its own tax rate to fund its public schools (the District Board in Brentsville imposed a lower rate than the other five districts)
- a tax on dogs was a significant source of funding for local schools
- Virginia's public school system started with elementary education in 1870, and the state did not establish public high schools until 1908
- though nearly all of Prince William's early schools were one-room schoolhouses, without separate rooms for different grades, only two (the first Orlando School and the King's Crossroads School) were painted red
- in 1900, the County School Board dropped McGuffey's Readers from the list of approved schoolbooks
- the County School Board commissioned the 1901 map of the county produced by William Brown
- the Thornton School, built in 1923 in what today is Prince William Forest Park, was the last one-room schoolhouse constructed in Prince William
- after 1920, the authorities of District Boards were transferred to the County School Board, and small one-room schools were centralized over the next 25 years
- school consolidation started in the 1920's as cars became common and roads improved, and Prince William County built multi-room buildings with separate classes for separate grades
- Prince William had 22 one-room schools for white children in 1920, and just 2 one-room schools for white children in 1940 (the last one, in Brentsville, closed in 1944)
- the county began to offer bus transportation starting in 1924 as new, centralized schools were built outside of walking (or horseback riding) distance of students
- consolidation of black schools did not begin until 1936, and bus transportation of black students was not provided until 1938
- the last three segregated schools in Prince William County were Antioch-Macrae, Washington-Reid, and Jennie Dean, and white students were not enrolled in those schools until 1966 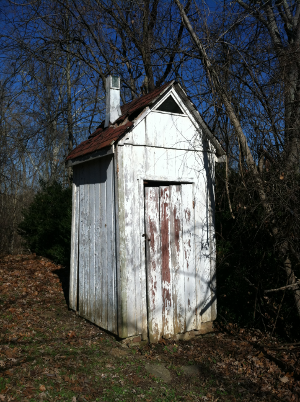 trustees for the District Boards were responsible for constructing school buildings, including the "necessaries" in the back