This material is based on a research paper done by Brad Hedrick, while a student at Mary Washington College and President of Historic Prince William in 1996-97. 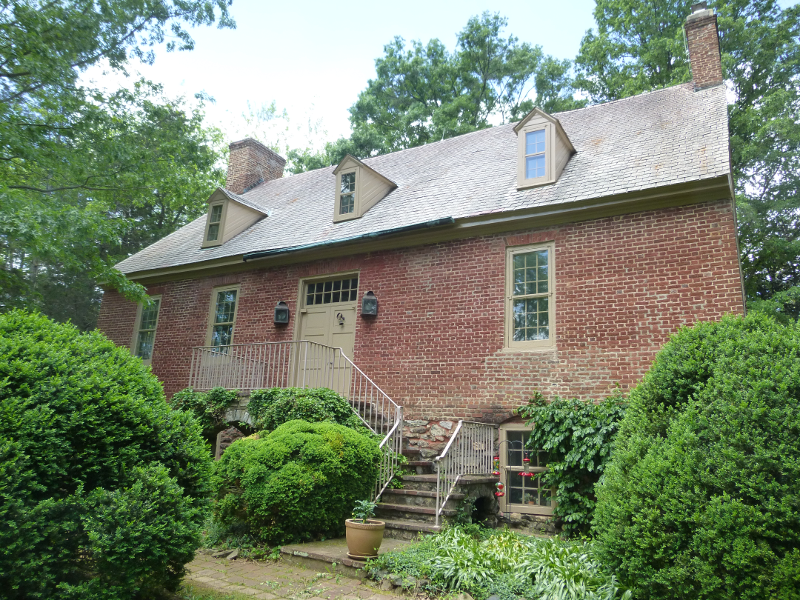 Bel Air is a one-and-one-half story pre-Georgian brick house on a raised stone basement. It has an unbalanced front with two windows to the left of the main entrance and one to the right. It is remarkably well preserved for its age and appears well cared for.

The house rests on an elevated basement almost completely above ground. It is built of rough fieldstone with windows that are directly under those of the main floor above. The water table which starts the brick construction contains relieving arches above the window openings. The basement windows are double hung-wooden sash with six-over-six panes.

The water table is laid in English bond and separates the stone foundation below and the brick work of the first level above. The remaining portion of the brick is laid in Flemish bond.

The main entrance is a wooden double leaf door with a simple beaded trim surround. The doorway has a rectangular transom light above divided into two rows of six panes over each other. A simple jack arch supports the brick above.

The asymmetrical window arrangement places two windows to the left of the center entrance and one to the right. The windows are double hung, wooden sash with nine-over-nine panes. They are painted white with wooden non projecting sills below and brick jack arches above.

The gable roof is covered with slate and has three evenly spaced but somewhat small dormers attached. The pedimented gable-roofed dormers are sided with beaded clapboards and each contains a double hung-wooden sash window with four-over-four panes. The cornice below the slightly projecting eave is plain and unadorned white painted wood molding. There is a small portion of copper gutter that spans the entrance only.

The overall facade is simple yet graceful in its appearance with a dogleg staircase leading to an entrance stoop at the main level. It has a white painted metal railing enclosing the stairs and stone arches below that support the structure.

Although it lacks the symmetry associated with Georgian homes it seems to be a frontier interpretation of the manor house style that was prevalent in the time that it was built, around 1740.1 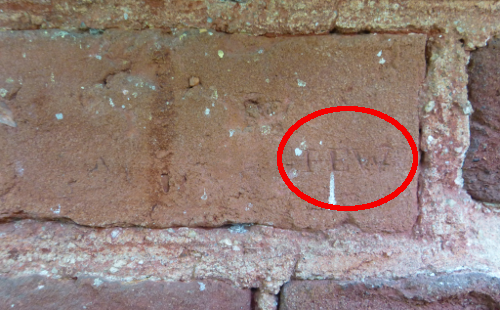 It contains elements of the Tidewater houses while using a center plan typical of later Georgian period homes. It appears to be a transitional house between the southern colonial and the Georgian styles or a vernacular attempt to imitate one or the other or combine elements that the original owner desired.2

The house, while retaining an asymmetrical design does not appear either awkward or unbalanced to the eye. Perhaps it is because of the evenly spaced dormers or the fact the basement windows are in line with the bays of the main level above. It wears the past 250 years well and looks forward to the next 250 years.

1. Clues to the style of a given house are sometimes ascertained through observation and clues available upon inspection of the exterior only. But sometimes it is necessary to view the interior layout of the structure to further determine its true style as noted by Emmie Ferguson Farra and Emilee Hines in their Old Virginia Houses Along The Fall Line (Charlotte, NC: The Delmar Company, 1971): The main floor has the central hall pattern common to most Virginia homes of the period. One side is the library. On the other side is the drawing room, featuring a folding wall which can be opened to joint the drawing room and the huge central hall for parties and gatherings.

2. Many clues to the style of the house are visible from the outside and their meaning can be put together to form assumptions as to the true origins of the particular period in which the house belongs as the demonstrated in Prince William Historical County Commission Prince William: A Past To Preserve (PWHC, 1982): A two and one half story brick home built on a central-hall plan, Bel Air has several architectural features. Prominent among these are the pre-Georgian front, the high elevation of the ground floor, the mammoth 20' outside chimney, the carriage entrance...